“Dad, should I be the president of the United States?”

Why are you asking kid?

Most of my friends in class think it is the best thing you can be.

So, here is what I think:

First, choosing a profession and a career is a serious thing. You have to know exactly what you want to do in life. You are going to spend most of your life working, and it can either be a boring drag, waiting for workdays to end so you can go back home, or it can be a long-lasting adventure with you pursuing something that you can’t get enough of.

It is the difference between an awesome life and an average one. And most people lead an average life because they are afraid.

Afraid of what Dad?

Afraid of fear. Afraid of risk and uncertainty. They are trying to make life as predictable and safe as possible, and by that taking all the fun out of it. Think about the people and characters that you admire. For instance, what is the common denominator of all the super heroes you like so much besides their powers? What kind of life are they leading?

Are they taking risks? Do they follow their passions?

So, you see? This is what I wish for –  to be a super hero!  in whatever field of life it might be.

Thanks, Dad. And what about being the president?

It depends on what being a president means. If you read what our founding fathers meant, it was about managing the army, our foreign affairs and protecting our rights. But today it means something very different.

Let me ask you this first – what makes you proud of yourself?

I don’t know, maybe when I succeed in doing something?

That’s true. Trying something and succeeding, getting a positive feedback from reality and other people makes you proud of yourself. It tells you are competent, that you can deal with life and do even greater things.

Look around you. See this bed, the light, your desk, the laptop on it, your shoes, your toys?

Yes, what about them?

Someone made them. Someone thought, designed and built them so we can buy and use them. Those people created something. So how do you think it made them feel?

You got it. But they also got to make money and enjoy other things in life.

So let’s get back to being a president. Why would someone want to be the president or a politician now days?

To pass laws and manage the country?

True, but what is the reason they want to do it?

Right, but the question is: CAN they and SHOULD they? Because you’ll agree with me that you don’t want to choose a career in which you are doomed to fail. Right?

I believe that pursuing a career  for the “greater good” can lead to something VERY wrong.

I know it is the opposite of what they teach you in school, but that it the truth because this is how our mind and emotions work. Doing great for you and society is a little more complex than what people think.

That sounds strange Dad. What is wrong with wanting to help others?

There is nothing wrong with that.

The question is how do you REALLY help others. How do you ACTUALLY make their lives better.

These days, politicians, including the president, are trying to simplify those questions by telling us that we should just do things for others. Pay taxes, serve our communities, help the poor, the sick, the unemployed, the environment, and even the polar bears. Their equation is simple: Someone needs something, that means you need to help.

But that is NOT how things work. This is a recipe for disaster.

Why? What’s wrong with just giving to other people?

Let’s think about it logically.

If you want to help someone, you need to give them something.

If you need to give them something, you have to produce it or earn it.

If you want to think and act, you need motivation and interest – or otherwise you are enslaved to do something you didn’t choose to do.

If you need motivation and interest, you need to have some kind of passion or desire to do it, assuming you are a free man and not living in a society where they tell you what you need to be doing for society like in North Korea, Soviet Russia or Nazi Germany.

Where does passion and desire to do something come from?

Let me repeat what you just said. “the things the YOU, LIKE to do”. You didn’t say, what OTHER people need me to do. You said, what I LIKE to do. And that is a very selfish, self-centered thing to say… but it is the essence of what I am saying.

When YOU choose what you want to do in life selfishly, you end up creating something valuable that other people can use, making their lives better. The cars, houses, food in the stores, clothes – all were made by someone who CHOSE to do it for his OWN good, for his OWN self-interest, and by trading in a free market, he could then sell it and make everybody’s life better including his own.

That is the system that creates wealth and that lifts us all from being poor.

If you don’t follow this sequence – you end up with confusion, contradictions and unproductive, forceful laws. With politicians telling you what to do, how to do it, risking the subtle nature and the source of human productivity, and with poor people not being able to lift and motivate themselves out of poverty by hard work, because they get used to the idea that someone is obligated to help them.

But what about the sick people that cannot work?

Again, it seems like this begs a straightforward answer – right? Let the government take a little from each of us and take care of the sick, the old and handicapped.

But this NOT the role of government, because governments use force and force should be used only against force and not to motivate you to help. It is a fact that people want and do help WITHOUT anyone forcing them.

Really? Are you sure that people will help other people if no one forced them to?

Yes, and they did before we had governments in a much more efficient way.

What will motivate them to help?

Let me answer with a tough question. Did you ever see a hurt animal?

Yes. I did. I saw a squirrel that was hit by a car.

And what did you feel when you saw it?

So what do you think you will feel if you saw a human getting hurt?

Why would you feel so bad?

Because it is a human being.

Exactly. We, by our nature, care for other members of our own species and we will help them as much as we can so they don’t suffer. We care about people because they make OUR lives so much better and we would like to see them prosper. There are people who do not care for other people at all, but most of us would like to live among other people and not on a secluded island.

If we had government step out from the role of forcing us to help each other, we would see a world of private charity that will funnel resources to the right people in the RIGHT way.

So let me give you the bottom-line.

You should focus on what YOU want to do in life and what will make YOUR life better. If you do that rationally, you will produce, make money, take care of yourself, your loved ones and anyone else that you care about. You might be so successful that you will be giving away a lot of money like many rich people do, because there is so much you need, and in the end of the day you do it for YOURSELF and YOUR CREATIVE MIND – not the money. Because money doesn’t buy you happiness – pursuing your values, including charity, will make you happy. And the truth is, that if we will be left alone by government to produce and take care of each other – everybody will be much better off.

So I don’t recommend being the president. I recommend choosing a real productive career. 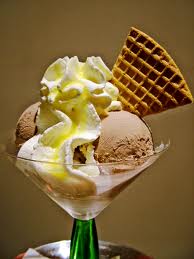 Hmm… I didn’t think about it that way. Besides, I want to build an ice-cream company that makes the best  ice-cream in the world. Better than the one we had in Italy!

You see? Without this passion of yours, how will people enjoy better ice-cream in the future?

They’ll just have to wait till I get older.

And if you want to get older, you need to sleep.

You’ll get it eventually. Sweet dreams.